A Launcells Curiosity 1
The photograph is of the outside of the East end of the chancel at St Swithin's Church and as you can just make out, built into the fabric just below the brick infill, a stone tablet.  The date on the stone is 1569 but the intriguing thing are the initials below the date are they R  • C  or R  • G ?  Could these initials refer to perhaps a Chamond or a Grenville or somebody competely different.   The point of all this preamble is that Launcells was more tied up with Hartland Abbey or even the Aclands than the Grenvilles, what's the answer?   Your thoughts please via email or to the Launcells History Group. 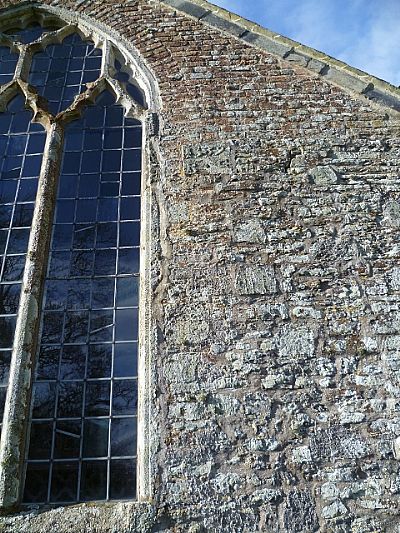 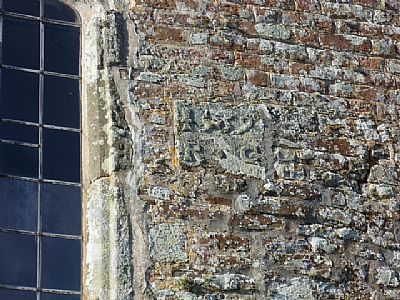 A Launcells Curiosity 2
At the entrance to Moreton Lane the is a large boulder, probably water worn and about 18" in diameter and 10" high, although there may be more under ground.   The curious thing about it is that there a stout iron ring set into the top.  The  question is what was this particular stone used for as it must have been of some importance.   What comes to mind is that it was a counterbalance weight, but that might be quite wrong.  Answers please via email or to the Launcells History Group.  The glasses case is there to show the scale and, no, I didn't leave them behind! 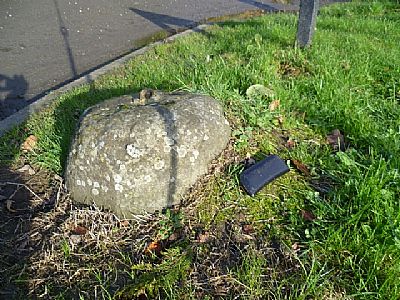 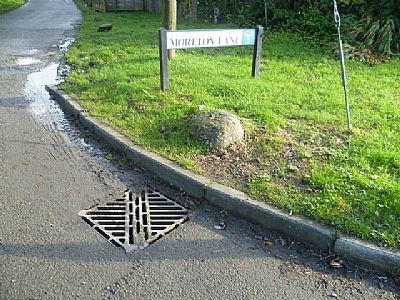 A Launcells Curiosity 3
At the Southern end of the cottages in Chapel Street in Grimscott is a reminder of the proliferation of iron foundries around Cornwall.   We are used to seeing the products of W. Gregory & Son of Bude, indeed we were very fortunate to have the grandson of the last ironmaster there, to give an illuminating talk to the History Group.   But you may have seen other names in the area such as Gliddon Bros of Marhamchurch.  However this one in Chapel Street is from further afield: Oatey & Martyn of Wadebridge.  From studying the cast iron covers it seems that the Council used stock from whoever had the items available.  So keep your eyes open these are valuable, not in monetary terms, but of local history and you never know what you'll come accross.  We found 4 drain covers by Thomas Lake of Barnstaple in the heart of the Yorkshire Dales, in Stratton there are 3 covers by Wm Glenton of St Germans while in Saltash on the quayside there is a least one by Gliddon Bros of Marhamchurch.  All these covers are at the very least of pre Second World War origin.   Please keep the Launcells History Group informed! 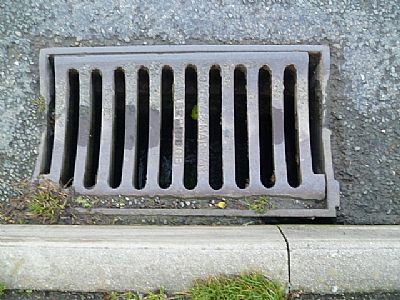 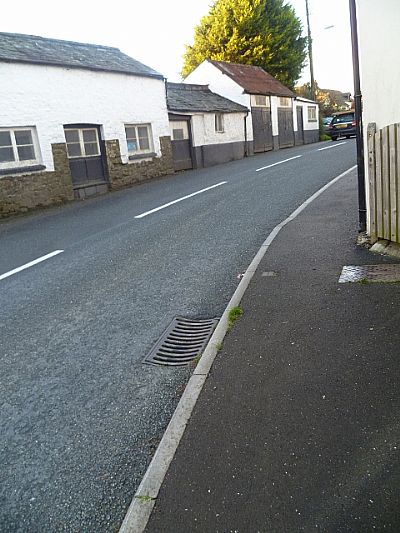 Having borrowed a real brick made at the Red Post Brick Works before it was closed down, and the lane change it's name to Tileyard, the manufactury was transferred to Whitstone; this find was confirmed by a chance discovery at the Wheal Martin Clay Country Museum of a book about the brickworks of Cornwall "Cornish Brick Making" by Charles Thurlow in which he mentions that the identifying mark of a Red Post brick is 5 nail holes.  As you can see in this example the 5 nail holes are clearly visible; each hole is about ¼" diameter and they vary from ½" to 1½" in depth.  This brick is 9" long by 4" wide and 2¾" deep.  It is also very roughly made, but this might be a discarded sample although it does have marks from mortar  on it.

The Whitstone brick is clearly marked and has a frog in it; it is also more accurately made but weathering has taken it's toll; it's dimensions are slighly bigger: 9½" long and 4½" wide but still 2¾" deep.  In both cases the clay appears to give a similar colour but the Red Post brick is redder and softer. 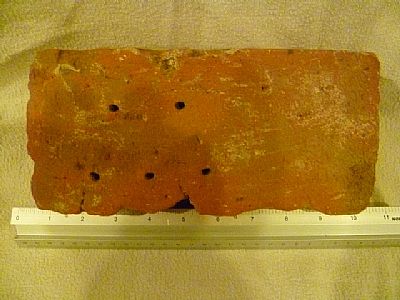 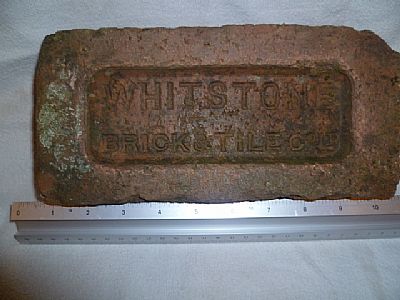 The Metalled Lane of Treveglos.

The road works carried on down Treveglos provided a good opportunity to see a lane as it would have been before tarmacadam was invented.  My mother was asked by a young man on her 100th birthday what was the most signifcicant improvement she'd seen in her lifetime. She answered after some thought: "Tarred roads".   Metalled roads upto that time consisted of stoned surfaces supplied by local, i.e. parish. quarries.  These were fine for horses and carts with iron shoes and tyres but pedestians ran the gamut of accumulated mud or dust and more dust in dry spells.  Where the contractors have peeled the modern surface back, Treveglos showed the size of the stones used and in photo 1 the wear on them.

In addition, the original width of the lane can be seen, for as our ancestors knew, the secret to good roads was drainage, not of the surface although that was necessary, but underneath the road surface.  So that they dug a ditch, called a water-table, either side of the road.  The water tables drained the underside of the road so minimising the effect of ice lifting and destroying the road surface, amongst other benefits.  Familiar eh?   Cornwall County Council started a policy of filling in the water-tables as a cheap (!) and easy way of road widening.  Photos 2 & 4 show these filled water-tables and photo 3 shows that there is no ditch on the field side of the hedge, as there shouldn't be because any spoil from the digging would have to be thrown back onto the field owner's side.

For a view, in good weather, of an untarred metalled parish road go to Roberts Hill where this lane leads to Higher Beer in Marhamchurch. 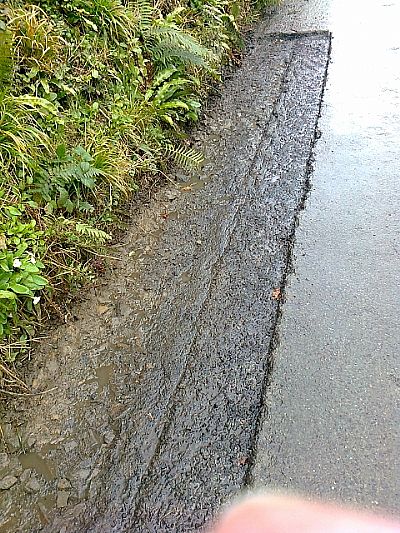 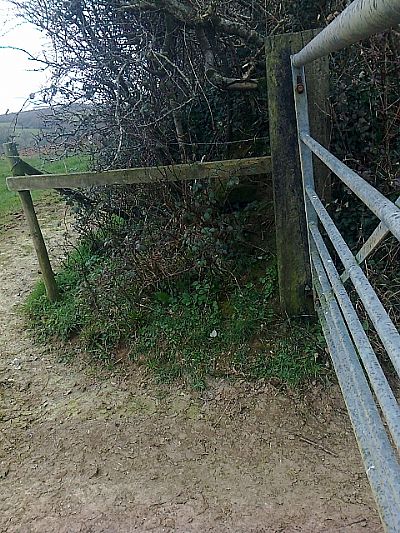 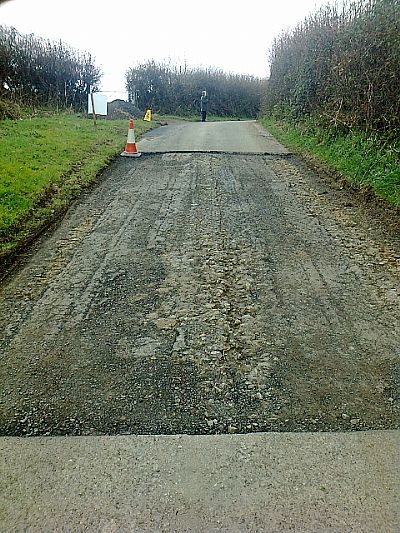 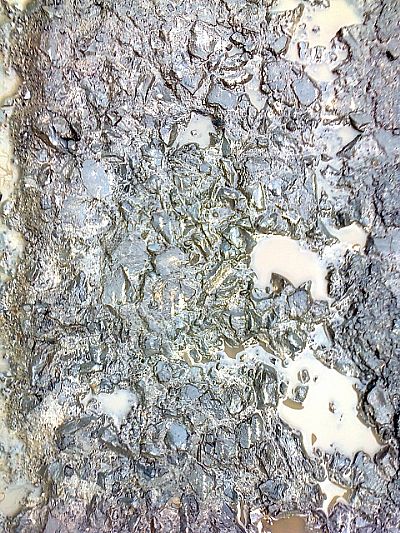 Once more the Church of St Swithin is the setting of a curiosity this time the exposed piece of wall painting above the box pews on the North wall.  While the big wall painting was restored a decade or so ago this little patch reveals an intriguing situation: there is visible a painting over an earlier painting and the earlier one is much brighter than the more sombre one which is on top as can be seen from the photos.  The fraction of the edge just seen at the top resembles in style the large wall on the South side of the belfry wall.   What a sight it must have been in very earliest times when the whole church was decorated in the bright oranges and reds! 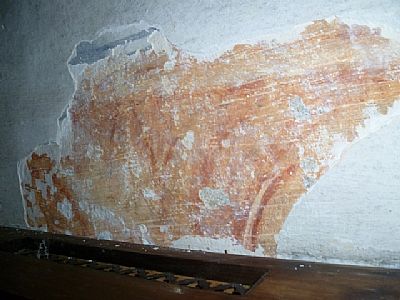 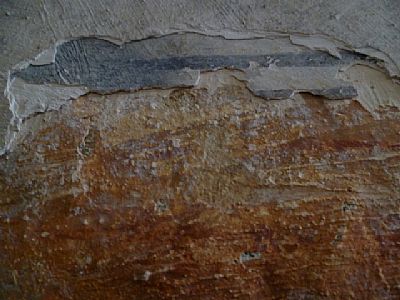 This month's is in sharp contrast to the last one!  The plaque is on the outside wall of Launcells Chapel as opposed to inside St Swithins and is very unusual, if not unique, in memorials, whereas St Swithins was only one of thousands that were colour washed and painted at that age.   The lady in question must have had some deep connection with the Parish but this is not in evidence on the plaque.  I have taken the liberty of enhancing the photo for the sake of clarifying the wording.  The plaque is positioned under the cill of a window in the Chapel North wall, the window being the second one in from the East end.   Someone may be able to shed some light on this fascinating memorial. 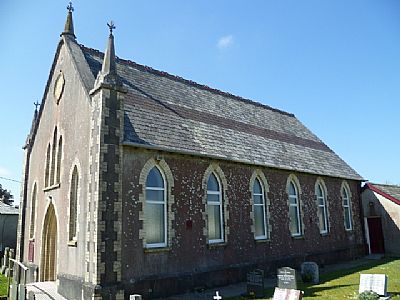 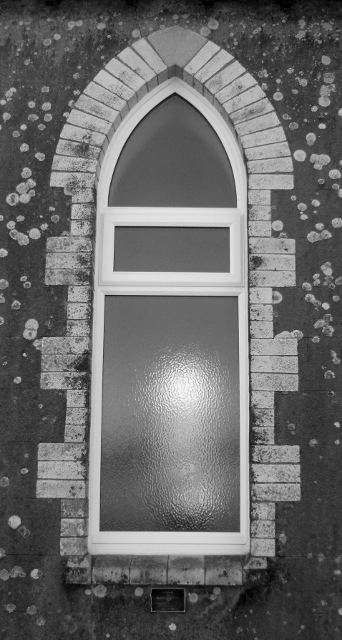 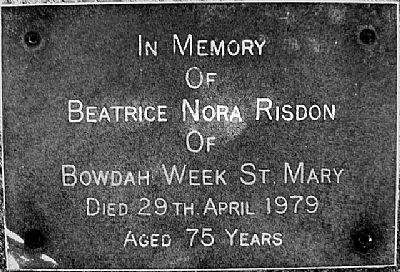 We have a puzzle for some of you this month, others, of course will know the answer!   Where is the 'cow underpass'??   The pictures show what it looks like now but at one time it was well used since it could be left open and cattle could roam from one field to another on what was a busy narrow lane.  You can imagine all  sorts of useful ways that this well constructed tunnel helped the farmer cope.   The underpass is not much wider than a cow and is now shallower than it was, but it has massive stone-built side walls supporting a roof a foot or more thick which supports the roadway.The late John James showed Freda Hockin where it is, and Freda showed me,  where is it? 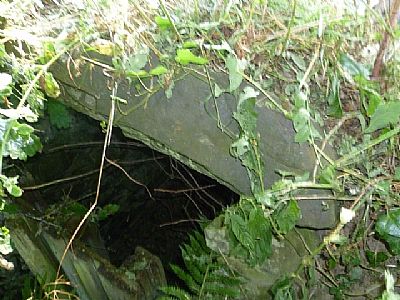 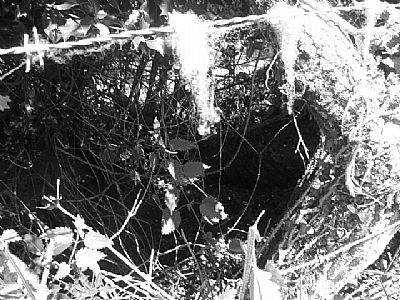 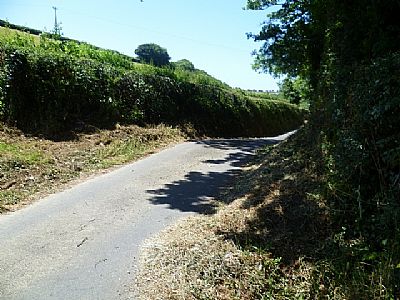 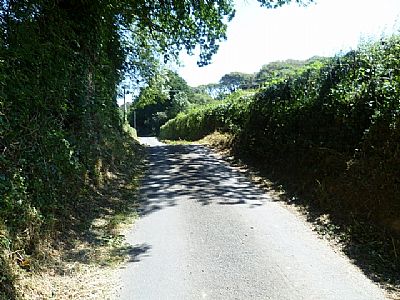 The photograph shows the opening group of Launcells Parish Hall on 11th August 1963 at Grimscott.  The Hall as now was seen as the focal point for major and minor activities in the parish, a fact which is easily forgotten these days of dilute community spirit.  Even the report in the Bude & Stratton Post of the time calls it a "village hall".  This report of 17th August 1963 states the bare facts: "Launcells' new village hall was officially opened on Saturday 11th August by Mr R. G. Pomeroy of Bradworthy, among those attending was Mr J. J. Smeeth of Poundstock who was President for the day".

What is curious is the fact that, of those questioned now, the reason for Mr Pomeroy being asked to open the new Hall is unknown.  Does anyone know?   Those in the photo are, from LHS: Mr Squires, Alf Gliddon, Edwin Honey, the Builder name U/K, Mr J. J. Smeeth, Mr R. G. Pomeroy, U/K, U/K, John Bines, Rose Sillifant and Arthur Sillifant is just cut off.  It must be pointed out that through John Smeeth, the landowner, his good offices and his talks with the tenant of that time that the project got off the ground, we should be very grateful.  Of the people in the photo it is believed that only John Smeeth and Rose Sillifant are still alive. 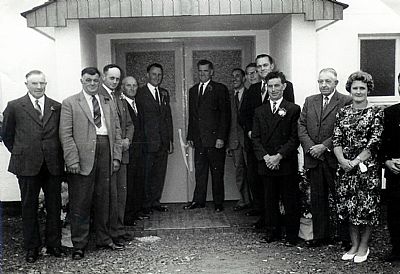 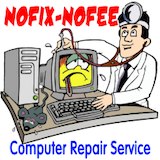 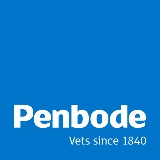